Susan Sontag was more of a figure than a person. Intimidatingly intelligent and self-assured, she was an embodiment of an intellectual. Suffice to say there is only one woman Hitchens talks in any length about in his memoir (other than his mother) and it’s Susan Sontag. Even Hitchens, the notorious woman-ignorer (if not necessarily a woman-hater) couldn’t ignore Sontag.

It felt good to be reading Susan Sontag. Also I sure looked good reading Sontag, walking around with black and white Penguin Modern Classic that just spelled class. I milked it, taking the Circle line and going in circles for hours basking in my intellectual superiority, looking down on my fellow commuters reading Fifty Shades of Horsecrap or some hyped thriller of the day. (I didn’t really do that. That would be crazy. I’m not crazy.) I even took a photo, so that I could post it on Facebook, Twitter and Instagram and let everyone know just how smart I was. (But for some reason I decided against brushing my hair that day.) 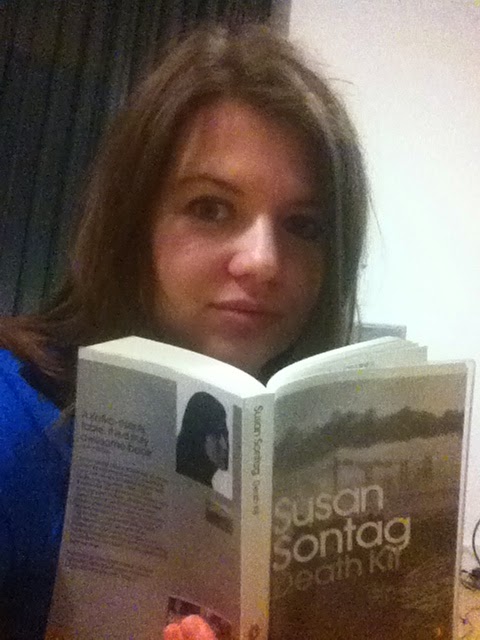 Of course, if I were taking this intellectual adventure seriously, I’d be reading Sontag’s essays, not novels, and they obviously are on my four or five thousand items strong to-read list but meanwhile let’s have a quick look at this (post)modernist trip.

Sontag was not a great novelist, mostly because she was a great critic and it seems you can’t be both. (I really hope that means I will be a great novelist). But that is not to say that this ‘Death Kit’ is completely without its merit – even though the book seems too calculated and self-aware, there passages of unexceptional brilliance.

Diddy, the protagonist, barely deserves to be called the hero of the novel because he is just so unmemorable and pedestrian. If I were to compare him to a famous figure, it would be Nick Clegg. I don’t know about you but I have to Google him every time to remind myself what his face looks like (I just did it again).

So we have Diddy: "Diddy, not really alive, had a life. Hardly the same. Some people are their lives. Others, like Diddy, merely inhabit their lives." Diddy, who tried to take his non-life but failed and after having been released from hospital embarks on a non-adventure, where things might or might have not happened. He might have killed a railway worker and might have started an affair with a blind girl. But of course the air of ‘is this all a dream’ pervades the novel and causes a mild frustration to the reader (or at least it did to this particular reader). It’s all very Kafkaesque, and now that I’ve actually read Kafka, I can say it with some authority.

As many critics writing novels Sontag uses this rather poor excuse of a plot to continue writing essays about art and philosophy and what’s real and what’s not real, and how real is real anyway, but really these ruminations should have never happened in the mind of her ‘Diddy the bland’ protagonist. He’s just really not that kind of guy. As a result we have embryos here – an embryo of a novel and an embryo of a collection of essays. And they could potentially grow into something fabulous but they just never have the chance. So sad.

“Oddly enough, the plot is what seems to come all of a piece—like a gift. It’s very mysterious. Something I hear or see or read conjures up a whole story in all its concreteness—scenes, characters, landscapes, catastrophes. With Death Kit, it was hearing someone utter the childhood nickname of a mutual friend named Richard—just the hearing of the name Diddy.”

I know we shouldn’t look a gift horse in the mouth but, Susan, some gifts are just not that great.

However, having read this entire interview with Sontag (http://www.theparisreview.org/interviews/1505/the-art-of-fiction-no-143-susan-sontag), I am now convinced she is my spirit animal. (Although you can see how she is better at talking about her novels than writing them.)