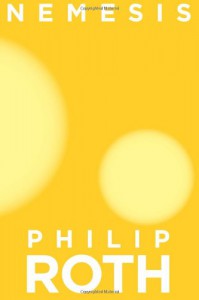 Roth’s last book and my first Roth’s book. As any of my school teachers could tell you – I have absolutely zero respect for authority, so I approached Philip Roth with exactly as much reverence as I would have for any first time writer in their 20s. Additionally, I find Roth’s rabid fanboys the most annoying demographic ever, so if you are one of them you might want to do yourself a favour and stop reading right here.
Alright, let’s see what this male Joyce Carol Oates has to offer. As a side note – isn’t it interesting how Oates is literally being accused of being over-prolific but no one says that about Roth?

This is a review of Nemesis but I’m also now reading American Pastoral and it’s hard not to comment on some obvious similarities. I hope the remaining 30 books of his are about something else. So what do we have here? An all-round American golden boy (even if Jewish) – athletic, honourable, burdened with a great sense of duty, decent and deprived of any sense of humour, whose life comes apart due to some perverse tragedy that God Roth sends his way. Roth, himself generously endowed in the irony department, deprives his golden boys of any sense of it, which in turn makes them so tragic. They cannot comprehend their own failure and the injustice of fate.

It’s a summer in 1940s and the town of Newark is struck with an epidemic of polio. The first half of the book is gripping, emotional and authentic. It’s the sort of story that you have to keep reminding yourself is just a book of fiction so as not to cry for all the broken lives there. The only false note there was Bucky’s, the book’s hero, questioning and eventually rejecting God. It just seemed so out of character for him that for a moment he sounded like a mouthpiece for someone else.

The story is still told by a rather mysterious first person narrator, who is really just an insignificant observer (another similarity with American Pastoral) and we forget about him until the final part of this book where he suddenly makes his presence known and comes forward to literally explain the whole thing to us. Now, I can see that this sort of fourth wall breaking is very much part of Roth’s style but completely unprepared at the time I had a very ‘WTF’ reaction to it. Completely abandoning the golden rule of ‘show, not tell’, the narrator proceeds to explain to the reader what Bucky was all about and what it all meant, how his big sense of responsibility was the cause of his downfall, etc., just in case the reader missed the point. Frankly, I was irritated and felt I was being patronised by the freaking narrator who didn’t trust me to get the book without him beating me on the head with the explanation. It didn’t work for me, it took me out of the story and also I’m out of a job as a reviewer, because Roth’s already reviewed the book in its final chapters. Something similar happens in American Pastoral, where the narrator is at the same the author who writes the book but it’s done a lot better there. Clever, even.

All in all – great book, shame about the ending.

PS. My favourite quote - “So unschooled was he in extravagance that he took the presence in a house of more than one bathroom as the height of luxurious living.” This was true for me as well. I remember when I first visited a house with two bathrooms I was absolutely blown away and decided it was a benchmark of having made it in life.

PPS. In an interview posted on Paris review website Roth says: “But you know, I don’t believe that the biography of a writer has anything to do with his books.”
I mean, LOL, Roth, LOL. (In another interview from 2010 Roth says he would never stop writing because how could he).