Barbara Taylor - The Last Asylum: A Memoir of Madness in Our Times 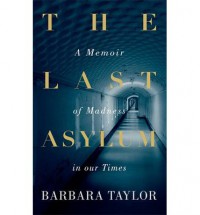 The Last Asylum: A Memoir of Madness in Our Times. This title, distilled to the three keywords: "asylum, memoir, madness" is what caught my attention. Together, of course, with a photo on the cover depicting the longest corridor in a mental institution – the thing that Will Self called so beautifully ‘the North Circular of the soul’ (I promise myself this is the only nice thing I will ever say about Will Self).

Barbara Taylor is an accomplished historian who went quite mad during her early thirties. It started off innocently enough but soon enough she was doing psychotherapy five times a week, and eventually ended up in a ‘looney bin’.
Now, I wanted to feel for her but it was hard, because Taylor is no Sylvia Plath and her descriptions of her psychoanalysis and her descend into madness are not very interesting. To be perfectly honest, to this lay reader it seemed that it was the daily psychoanalysis that was making her so unstable. I am a very practical person who has gone through a short period of being very unwell mentally and I know for a fact that if I spent my days vivisecting my childhood then, I would be medicating heavily now.

The problem I had with Taylor’s account was that I could never understand what her madness really was, how the psychoanalysis was helping her and how she finally got better. Blame my low empathy levels but I haven’t read about a person struggling with her own mind and her demons. I have only seen a baby-emperor (as she once aptly called herself). She makes it almost impossible to feel any empathy towards her. She was young, she didn’t have to work 9-5, she drank a lot, had lots of sex with unsuitable men, had anxiety attacks and horrible dreams. That’s me and half of my friends on any given weekend. Thank God, I absolutely cannot afford twenty one years of psychoanalysis. Twenty-one! Daily.

Frankly, she doesn’t make a good case for psychoanalysis. She quotes constant shouting matches with her therapist and then even in the chapter called ‘Cure’ I couldn’t see how the cure had anything to do with those years of therapy. She presented it as if she just grew out of it. I don’t doubt that she gained a disturbingly deep knowledge of herself but I don’t see how knowing what makes you ill can make you better. Additionally, her sister who obviously grew up with the same set of parents turned out perfectly fine. So what’s the point of this torturous analysis?

She does a way better job in the second part of the book where she takes on a role of a historian and observer and treats us to a crash course of the mental health system as well as insightful observations of her fellow patients. Those parts are definitely the highlights of this book. She describes asylums (now almost all gone) as generally safe places offering a respite from life with all its obligations once those obligations became unmanageable. She also describes warmly the community feel of them, even despite the fact they were often violent places full of hostile patients. Now the asylums are gone and have been replaced by the so called ‘community care’ which emphasizes independence and self-reliance. For people weakened and often basically paralysed by a mental illness it doesn’t seem to work very well. Despite its many flaws Taylor is a defender of 'bins' and I guess, so am I.

So what’s the lesson and note to myself here? Don’t go mad, Kinga. Don’t go mad. Don’t go mad because if you go mad there will be nowhere for you to go.