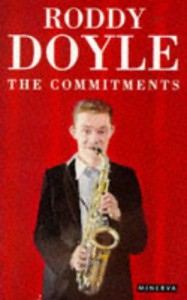 Initially I thought there was a mistake and I somehow obtained the screenplay for the film rather than the novel. Doyle shows a true bravado in his disregard for what we assume to constitute a novel. His narrative is composed almost entirely of dialogues and some diminished descriptions which are no more than stage directions.

Yet, somehow, despite those self-imposed constraints and in just 140 pages he manages to capture the essence of teenage dreams, how they burn and then burn out, how they get lost in arguments and get flooded by hormonal rivers. It’s all there in a story of a few Dublin teenagers who form a band and try to bring some soul into the Irish capital. Make no mistake, though, this is not a novel about sex, drugs and rock’n’roll. It’s a lot more innocent than that. It’s neither glamorous, nor bohemian. It’s just working class. It’s like that Lorde’s song Royals.

Even though the format of ‘The Commitments’ didn’t quite work for me, because I’m attached to the more Dickensian kind of narration, it did manage to extract some emotional response from me. However, I think this is one of the few instances where I think ‘the movie is better.’ And that is without actually having seen the movie.

*Knowledge of 60’s r’n’b and soul music desirable but not essential for the enjoyment of this book.