There are a few reasons why I listened to this book.
1) It’s called ‘Labor Day’ and I listened to it on the Labor Day. This one is actually more of a coincidence than an actual reason but let’s put it there anyway.
2) It takes place in New Hampshire in early September, which is when I arrived in New Hampshire twelve years ago to spend a year there. This is the nostalgia reason.
3) I suppose I’ll come clean and say it: the audiobook is read by Wilson Bethel who looks like this: 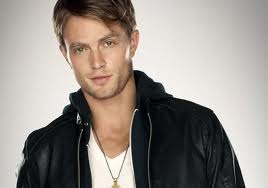 I fancied the idea of having him talk to me for hours.

Of course , it would help if he was talking sense. There is nothing worse than a really hot guy who opens his mouth and you wish he never did because now there is no way you could ever bring yourself sleep with him.

Luckily not the case with ‘Labor Day’ which turned out to be a decent book. It is narrated by Henry who looks back on one very hot Labor Day weekend when he was thirteen which changed his life forever. Henry’s mother, Adele, is not exactly in the shortlist for the Mother of the Year award. She is agoraphobic and barely leaves the house. The father is long gone having started a new family with someone better adjusted than Adele, so Henry lives alone with his mother eating canned and frozen food and dreaming about girls and sex. Little ever changes in their monotonous existence until that fateful weekend when Frank appears in their lives and it’s just like Adele to invite a possibly dangerous stranger into her house.

As it turns out, Frank doesn’t seem to be dangerous and is quite possibly the best thing that could’ve happened to this tiny family. He cooks and fixes things around the house, and plays baseball with Henry. Here the book walks the thin line between an interesting story and a Hallmark Channel Movie where people meet an angel in an unlikely form of a fugitive criminal who teaches them to love again and make pies.

What saves the novel is Henry, who having just entered puberty, is sure to complicate things the way hormonally unbalanced individuals only know how. I think those self-inflicted complications are the best part of the book which should with the end of the weekend. I think three or four chapters of what was basically an epilogue was unnecessary. But I’m generally not a big fan of epilogues which, to me, are like the extra piece of chocolate cake. You think you want it but after you had it you realise it would’ve been better if you stopped eating after the first piece.

As for Wilson Bethel’s performance, I particularly liked the low, raspy voice he used for Frank. It made Frank appear in my head fully fleshed out like book characters rarely do.

I have also just learnt that this is being turned into a movie and Kate Winslet will play Adele. After Little Children it’s clear that she can play unhappy mothers well.